Compared to how January 2011 might have played out, where every taxpayer in the United States would have received a smaller paycheck if the 111th U.S. Congress hadn’t acted to extend the 2001 and 2003 tax cuts, the Congress’ late action to extend those tax rates for another two years, while also throwing in a 2.0% payroll tax cut, might seem like a great deal. 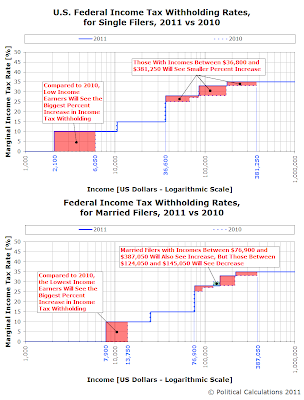 But then, we saw the changes the IRS rushed out for the income tax withholding rates that will apply in 2011, and we can confirm that the odds that you’ll actually have an additional 2.0% of your income to take home aren’t very good at all. From what we can tell, you’ll only see that much of a change over your 2010 paycheck if your income is less than $2,100 if you’re a single filer, and less than $7,900 if you are a married filer.

Meanwhile, many of you may find yourselves actually taking home less money on your paychecks!

As for why the promise of a 2.0% payroll tax cut really doesn’t add up to 2.0% of your salary or wage income, the charts reveal how the Obama administration is altering tax withholding for 2011 with respect to what they established in 2010.

By lowering the income threshold at which income tax withholding begins to apply for the lowest income earners, the government effectively reduces the size of the payroll tax break.

That will have economic consequences, in that wage and salary earners won’t actually have anywhere near as much money, and therefore, nowhere near the impact, that the Obama administration’s economic planners might have hoped. Michael Cooper describes the thinking of the administration in seeking to targeting employees for the payroll tax cut (HT: Felix Salmon):

The tax cut was, by design, hard to notice. Faced with evidence that people were more likely to save than spend the tax rebate checks they received during the Bush administration, the Obama administration decided to take a different tack: it arranged for less tax money to be withheld from people’s paychecks.

They reasoned that people would be more likely to spend a small, recurring extra bit of money that they might not even notice, and that the quicker the money was spent, the faster it would cycle through the economy.

Economists are still measuring how stimulative the tax cut was. But the hard-to-notice part has succeeded wildly. In a recent interview, President Obama said that structuring the tax cuts so that a little more money showed up regularly in people’s paychecks “was the right thing to do economically, but politically it meant that nobody knew that they were getting a tax cut.”

So we know that people spend payroll tax cuts rather than saving them, which is exactly what we want any fiscal stimulus to do.

If only the administration’s economic experts could have foreseen that such a small group within the government, like the IRS, could do so much to counteract their hopes that the tax deal would really be a second economic stimulus package!