What Should Californians Learn About Pension Reform from the French? 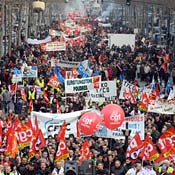 Despite the threat of another mass labor protest scheduled in France tomorrow, President Sarkozy is promising the modest increase in the standard retirement age from 60 to 62 will pass the legislature. Many of the French protesters are the students and youth—angry because they feel they are entitled to these “social protections”.

Young people in the U.S—and especially in California—have strong reasons to advocate for making similar, more dramatic cuts to entitlement programs. If special interests have their way, the youth will continue to pay for the current and future consumption of the baby boomers. Not only will these scheduled increases in mandatory spending cost a huge amount in taxes, it will also become increasingly costly in terms of government debt, lower economic growth, and possibly with currency debasement.

The groups with the most to gain from political transfer know it too. According to Federal Election Commission data for California, retired people were the biggest contributors to political causes out of all the various different PACs, soft money donors, and individuals contributing from within the state. Moreover, Labor Unions, Teamsters, and government employees have been in the top 10 wealthiest special interest groups in Washington for the past 20 years.

Much of the youth of France suffer from a culture of dependency that blinds them from seeing the devastating effects of an increasing labor regulations and entitlement programs. Hopefully Californians can avoid a similar fate and help to steer the course towards making growth enhancing reforms in pensions and “mandatory” entitlement programs.